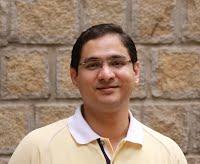 I am an Associate Professor of Computer Science and Automation at the Indian Institute of Science (IISc). Before joining IISc, I obtained a PhD from the Indian Institute of Technology (IIT) Bombay in 2007, and a BE from the Government College of Engineering Pune (COEP) in 2002, both in computer science and engineering. From 2007 to 2009, I was a post-doctoral research associate at the University of Pennsylvania. A paper that I co-authored won the ACM SIGBED best paper award at EMSOFT 2008. I am a recipient of Prof. Priti Shankar Teaching Excellence Award for 2014, and faculty awards from IBM, Microsoft Research India and Mozilla Corporation. My advisees have received fellowships and awards from IBM, Google India, and Computer Society of India.